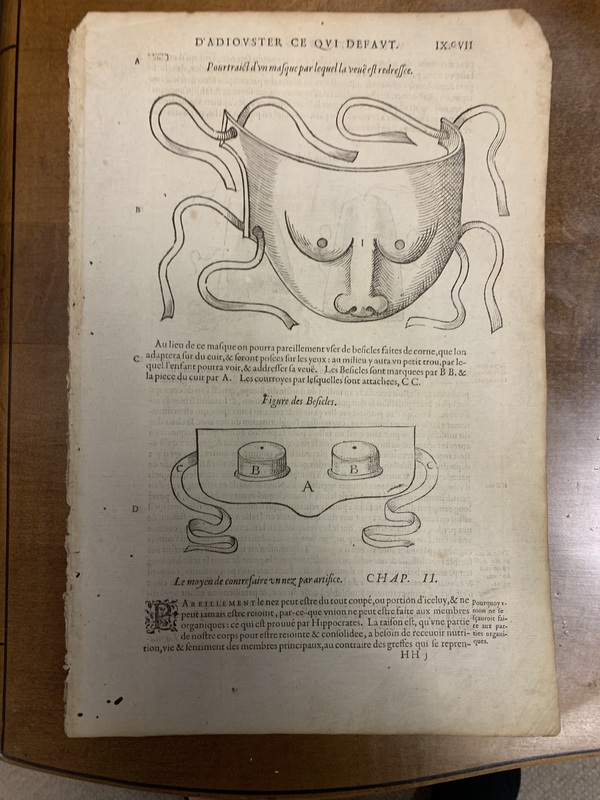 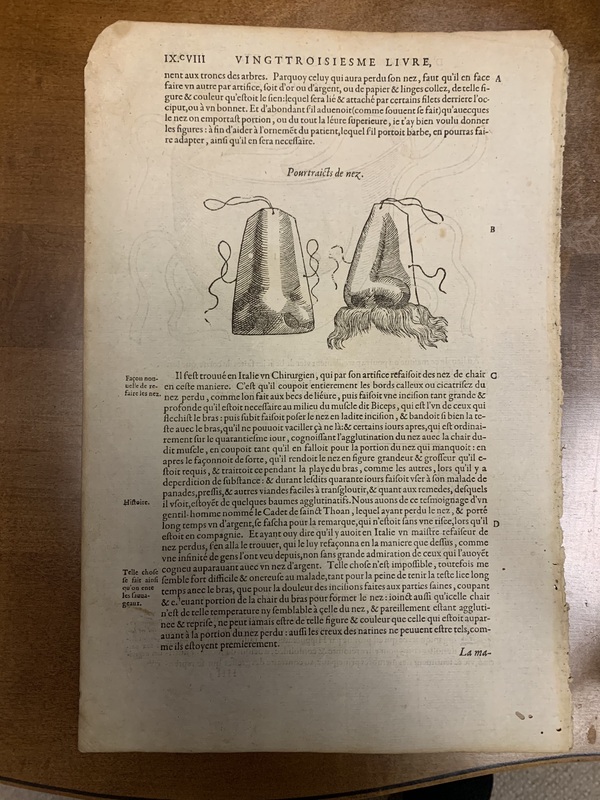 The Works of Ambroise... Of the Means to Repair Natural or Accidental Defects, Leaf, 1585

This leaf comes from a French medical text titled Les Oeuvres d’Ambroise... Les Moyens et Artifice d’Adiouster ce qui Default naturellement ou par Accident, or in English, The Works of Ambroise... Of the Means to Repair Natural or Accidental Defects. Ambroise Paré (1510-1590) produced this work only five years before his death, another example of the many contributions to the medical field that Paré is known for.

Loosely translated, this leaf describes two medical assistance prosthetics. On the recto (right) side of the leaf are diagrams of face masks, intended to improve vision problems in adults as well as children. The verso depicts nose prosthetics, and instructions for completing a nose graft, should one’s nose be cut off.

Paré became one of the most notable surgeons of the European Renaissance, even considered by some to be the “Father of Modern Surgery.” Paré began his career in 1533 as a barber surgeon apprentice at Hotel-Dieu in Paris, and by 1537 was working as a surgeon in the French Army. It was as an army surgeon that he first gained notoriety for his skill and innovation. Paré is renowned for drastically improving the treatment and recovery of war wounds. Trauma surgery was gruesome and it was typical practice to cauterize wounds in order to stop the bleeding, especially gunshot wounds which were believed to be poisonous. This was done using boiling hot oil, poured over open wounds. It was an excruciating and dangerous practice. While tending to wounded soldiers Paré ran low on boiling oil, and instead wrapped the wounds in egg yoke, rose oil, and turpentine. Much to everyone’s surprise those treated with the mixture were healing better than those treated with the burning oil, giving rise to the practice of dressing wounds instead of burning them.

Paré reported this and other findings in 1545 in an initial text titled La Méthod de traicter les playes faites par les arquebuses et aultres bastons à feu, or in English The Method of Treating Wounds Made by Harquebuses and other Guns. Yet, his work was met with criticism from the medical community for being written in French instead of the standard Latin. Still, Paré’s contributions to healing the afflicted changed European medicine.

After gaining notoriety in the army, Paré was selected to be the personal physician/ surgeon to the king of France, subsequently serving four monarchs: Henry II, Francis II, Charles IX, and Henry III. As a revolutionary surgeon Paré is also credited with being the first to introduce the implantation of teeth, artificial limbs, and gold and silver artificial eyes. His medical discoveries and service to the Kingdom of France changed the future of medicine forever, and items such as this leaf give modern audiences access into the very mind of a medical genius.

Additionally, we can infer more information from this leaf by viewing it with an artistic and cultural perspective. As depicted in the illustration, the prosthetic nose also includes a mustache. This may give insight into grooming and appearance standards of sixteenth century France. Additionally, the instructions for attaching a nose which has been severed from one’s face is an interesting problem to address. Furthermore, that an act such as cutting your own or another’s nose off could potentially be deemed as “accidental” is a deliberate choice on the part of the author that provides unique insight into the intimate communities of early modern France, and potential tensions that these societies faced.