The promotional letter put forth by the Adelsverein wasn’t just a list of official payments and land division, however. It also contained positive and persuasive phrases regarding favorable conditions in Texas. These statements are grand, sweeping generalities, and hid some of the challenges that early immigrants faced. Let’s compare them to the story of another immigrant who arrived in Texas in 1845, Bernhard Monken. An 11-year-old boy at the time, he recounts his journey with chilling clarity as an adult, in 1902.

The promotion: “A society has been established whose purpose it is, to direct German emigration, as much as possible, to a single, conveniently located point...”

The reality: “conveniently located” is hardly how you would describe the German settlements. They were very far inland from the coast, making it difficult and expensive to transport the thousands of immigrants to them. At one point, upwards of 3,000 German immigrants were stranded at Indianola, waiting for transportation inland. The first settlement, New Braunfels was 150 miles inland, a long and tiring journey in 1845.

Bernhard’s story: Stranded at Indianola after landing, “Because of the lack of suitable construction material, people were forced to build earthen huts of grass. To get to the reeds, you would have to work for hours in water up to your hips. We carried all the material on our backs. Heavy downpours weakened our freshly cut grass. The walls collapsed and the people literally lived in earthen holes or caves” 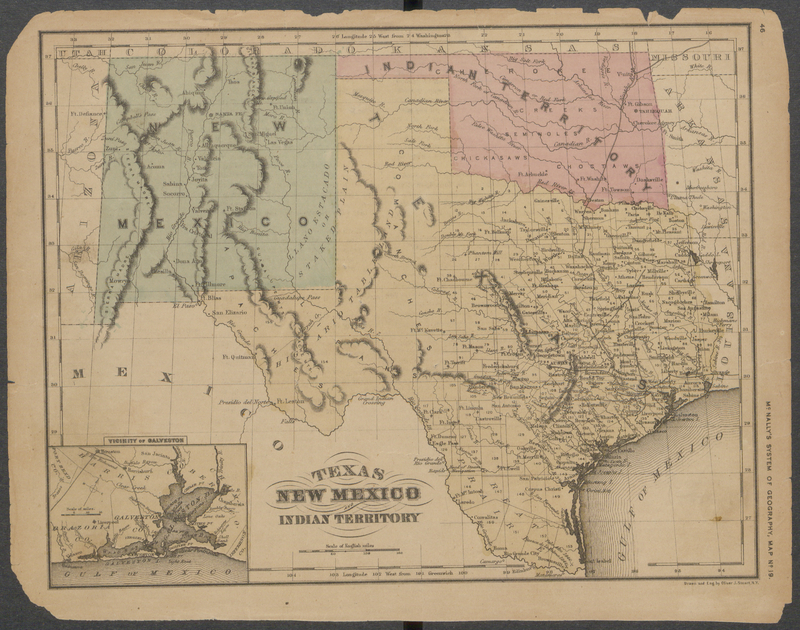 The promotion:  Purpose “...to support the emigrants on their long journey and in the new homeland.”

The reality: There simply wasn’t enough of anything for the new immigrants. Not enough food, materials, oxen, horses, wagons. And once they left Indianola, they were essentially on their own and at the mercy of the teamsters who were hired to guide them.

Bernhard’s story: The wagon that the Adeslverein gave them was forced to stop on the second night due to a broken wheel, and once that was replaced, the axle broke. It took Bernhard’s family and those traveling with them (16 total), 14 days just to get to Victoria, a journey that would be a 45 minute drive today. Their guides abandoned them and they were forced to hire three different teamsters at various points along the journey. One left them waiting, surrounded by ant nests, another led them to a swollen and treacherous river and later abandoned them altogether.

The promotion: “...it was the political and social situation, the climate, the soil and the future of the chosen land which were identified as the basic conditions for success.”

The reality: When this letter was written, in February 1846, it was quite a stretch of the imagination to say that the political and social situation was favorable. The Republic of Texas was annexed by the United States at the end of 1845, which would cause political upheaval. And less than six months later, in April of 1846, war broke out between Mexico and the U.S. Furthermore, the land that German immigrants were originally intended to settle on, called the Fisher-Miller grant (Northwest from New Braunfels), was not socially or physically ready for settlement. Inhabited by Comanche Indians, no one could move onto the land until peace was reached with the tribe, and in addition, the land was not fertile for farming. In fact, although Valentine Hoch was granted land in this area, he nor his family ever settled there.

Bernhard’s story: Bernhard and his family were in Indianola when war broke out. And the American contractor who was supposed to provide wagons gave them all to the disposal of the government. Therefore, the only wagons available were ones that were not fit for war, which was probably why the one they got broke down multiple times. Although they did reach New Braunfels eventually, it is unknown if they ever claimed their land on the Fisher-Miller grant.

The promotion: “A chaos of obstacles had to be overcome, some of which required substantial categorical modifications of the original plan of action”

The reality: The Adelsverein simple wasn’t prepared for the logistical reality of moving thousands of emigrants to Texas. They assumed that a wealth of cattle in Texas meant it would be easy to get oxen and horses to pull wagons. They didn’t think about that fact that getting hundreds of heads of cattle to one point is not an easy feat or even a possible one. They also did not consider the hardships that families would have to undertake in the long journey to their new homes. The Adeslverein did not provide adequate support and were quickly overwhelmed.

Bernhard’s story: Out of the 16 people Bernhard initially set out from Indianola with, as few as 8 arrived alive and safe in New Braunfels. The dead included his mother and brother, who perished from illness as they waited surrounded by ant nests at Spring Creek, a sister, who died of a injury from a rushed horse ride for medical help, and his other sister, who passed soon after arriving in New Braunfels. The journey from Indianola to New Braunfels took them 3 months, and in that time, 7 had to be buried in various cemeteries along the way, and one left behind to be tended to by strangers. They were given no help that they did not seek themselves, and many paid the ultimate price. This story is not unique among those German emigrants who came to Texas through the Adeslverein. Although no exact number is known, it is estimated that as many as 500 German immigrants or more died in the summer of 1846 alone.