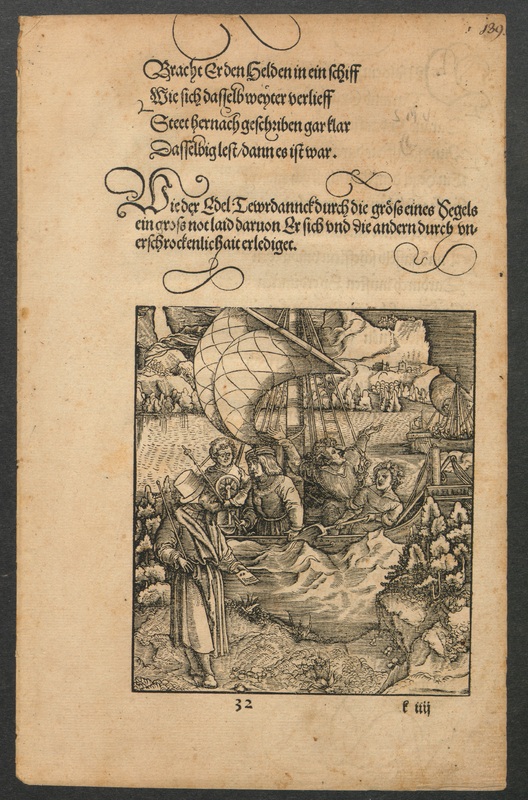 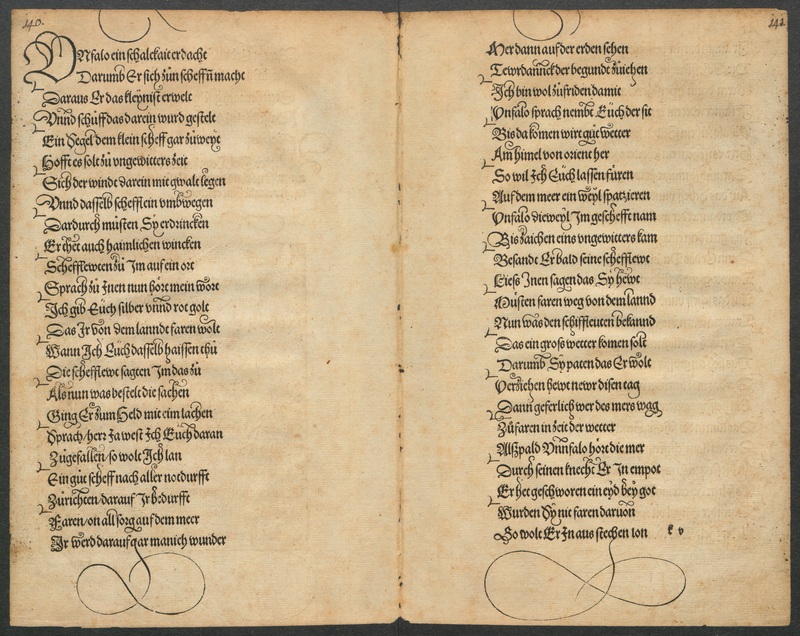 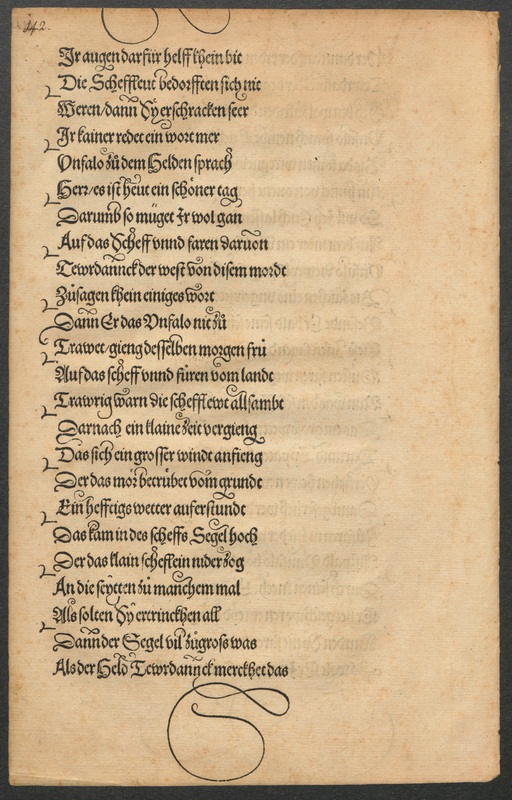 This leaf is from an original printing of the German epic tale, Theuerdank. Though it was first printed in 1517, it was not released until 1519 following the death of Holy Roman Emperor Maximilian I, the story’s patron and inspiration for its main protagonist. Maximilian I conscripted author Melchoir Pfintzing to write the dramatized story of how the Emperor (portrayed through Theuerdank) ventured on a cross country journey to meet his betrothed, Mary of Burgundy (Lady Ernreich in the tale). The epic was written in German verse and was printed by Augsburg printer Hans Schonsperger, who released 40 copies printed on parchment, and 300 printed on paper.

The story, set in 1477, follows the Knight Theuerdank as he encounters over 80 obstacles, including monsters and sea troubles. These obstacles and adventures are displayed in 118 woodcut images, or xylographs, accompanying each chapter. The image displayed in this leaf shows Theuerdank, the hero, surviving a shipwreck. In the year 1517, while the use of xylographs was a popular trend, no text at the time utilized this many images to support the story, adding unprecedented dramatization to the lore of Theuerdank. Maximilian I was known for commissioning elaborate woodcuts during his reign as Holy Roman Emperor. Along with producing works with a high quantity of woodcuts, such as in Theuerdank, Maximilian I also commissioned abnormally large woodcuts. One example is The Ehrenpforte Maximilians I, which was produced on 36 large sheets of paper.

In addition to the xylographs, Theuerdank is perhaps best noted for its influential black lettertype face. This typography, or font, is similar to what is now recognized as Gothic Script, Gothic minuscule, or Textura. The use of this lettertype in the Emperor’s epic tale changed the style of German typography for centuries to come.

We know that Maximilian I wanted to ensure his legacy in the minds of his empire, and commissioned artisans to retell his life story utilizing many different art forms. Theuerdank was originally part of a trilogy of written works, but is the only one to have been completed entirely and produced in its contemporary time. What these commissions signify to historians is an impressive understanding on the part of Maximilian I of the use of imagery and iconography within a society. He was possibly the first modern ruler to utilize the medium of printing to ensure his fame long after his death, and there is no doubt he was successful. The books produced in his name not only told his life’s story, but the artifacts dramatized and fictionalized it, using the skill of literature to preserve Maximilian as an immortal hero. Taken at face value, Theuerdank gives modern audiences a look at the type of tales and stories that early modern communities thrived on: chivalric knights, cross country adventure, obstacles and monsters and above all requited, courtly love. Yet, this leaf, even without the rest of the book, functions as much more than a knightly tale. Combined with the visual grandeur of the woodcuts, and the intriguing bold, black lettertype, Theuerdank changed the world it was produced in.